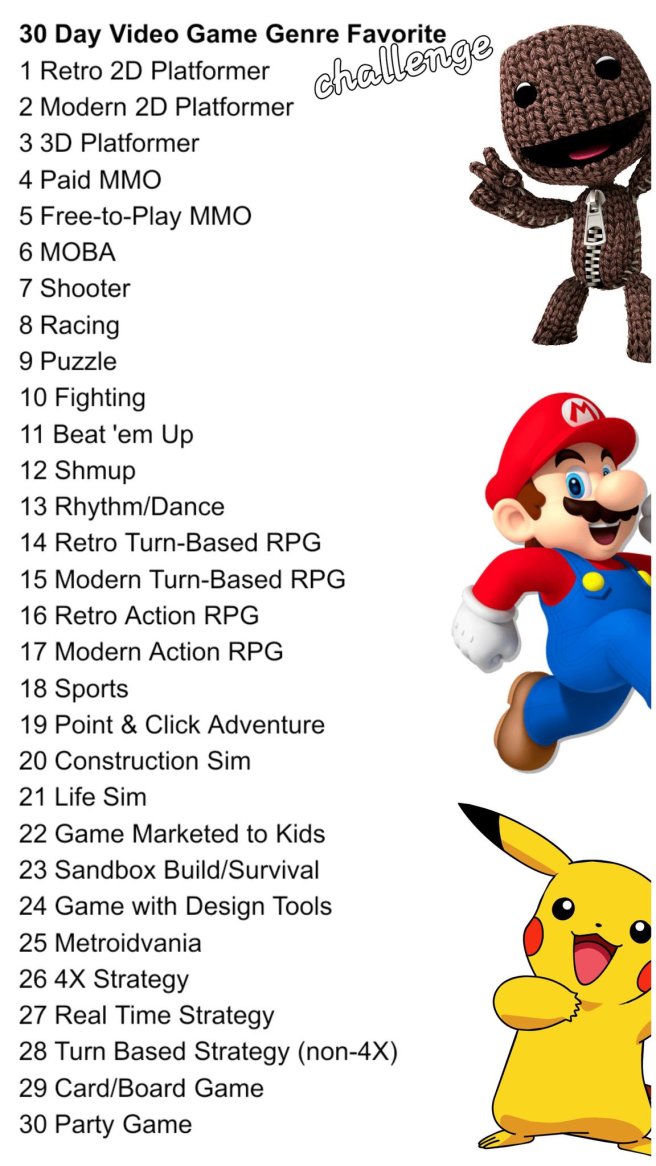 Another month, another challenge! Hi everyone and welcome to my blog. This month’s challenge is all about my favorite video game genres. I stole this one from my friend Will 🙂 hope you guys enjoy! Let’s jump into it!

Ok I’ve got two games for you today and technically they are episodic interactive adventure games. But let’s be real, they are point and clink with a little bit of action mixed in. These two options are also super bittersweet to talk about since they came from Telltale Games which unfortunately made some shitty business ventures and ended up closing its doors for good. It kept a skeleton crew and kicked most of its staff to the curb so suddenly after their investors pulled out of funding. I loved Telltale for the art these creators had made but I absolutely despise the company itself for pushing out products and being a staple in “crunch time” culture. They pushed these creators so hard and then cut them loose one day without even enough time for them to find a way to find another job. They didn’t even get severance pay. Those poor creators 😦 I’m just happy that many of them did get to find new jobs, especially when other companies saw how poorly this was handled and opened their arms to them for support. But still, GIVE CREATORS TIME TO FINISH GAMES! Don’t work them to death, and especially don’t cut them loose at the dime of a hat because of your shitty practices.

The Wolf Among Us is probably my all-time favorite to date. It also breaks my heart the most that we were so close to getting that second season of the game but it was ripped from us with Telltale’s shitty practices and closure. To those who worked on this masterpiece, thank you so much for creating such a wonderful game. I truly appreciate your efforts and I replay it time and time again.

To give you some perspective, The Wolf Among Us is a canon prequel to the comic book universe of Bill Willingham’s Fables series. It’s sort of a film noir story where you play as Bigby Wolf (the big bad wolf in human form). He’s the Sheriff of Fabletown, where all the Fable characters who crossed over into Manhattan live. These fables blend in with the humans with an enchantment known as a “glamour” so that they appear human. Those without glamours are relocated to a rural community known as the “farm”. Let me tell you now, you don’t want to go to the Farm.

Anyway, it’s a detective story where Bigby tries to solve a murder mystery, going up against the Crooked Man, Bloody Mary, Georgie Porgie, the Jersey Devil, and more. It’s so interesting seeing how these fable characters from our childhood are portrayed in this storyline. Hell, Georgie Porgie runs a strip club, the Jersey Devil owns a pawn shop, and the Little Mermaid is a dancer. I’m not going to spoil the gameplay because I do believe this game needs to be experienced for yourself. And if you get a chance, dive into the comics. They are great!

Now at least this game has a bit of closure with their characters because they are confirmed for Borderlands 3. And you guys should already know how much I love Borderlands.

Anyway, Tales from the Borderlands had you playing between two main characters: Rhys and Fiona. It takes place mainly on Pandora following the events of Borderlands 2. In addition to a slew of new characters, we also see some familiar faces like Mad moxxi, Janey Springs, Athena, Brick, Mordecai, Claptrap, Zer0, and Handsome Jack to name a few. It’s a lot of fun and definitely has the same humor as the original games.

I’m not going to spoil a thing here, play it for yourself, especially if you’re a fan of the Borderlands story. It’s a lot of fun and I hope we get some good action from these characters in Borderlands 3 (though I believe they aren’t voiced by the same actors which is a bummer for them).

Anyway, with that we conclude Day Nineteen of my 30 Day Video Game Genre Favorite Challenge! What’s your favorite point and click adventure? Let me know in the comments below or share your own video game challenge! Thanks for reading 🙂

I love scribbling down stories; I'm here to share those scribbles with you :) View all posts by lostneverglow